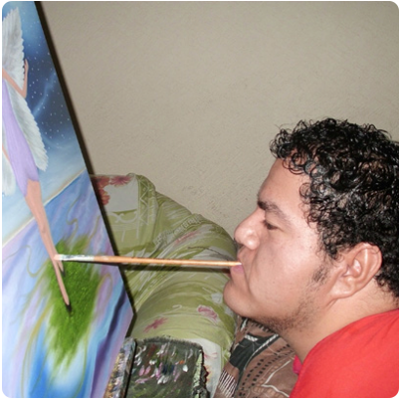 Fidel Serapio Blas Balderas was born on 24 April 1984 in Mexico City. During her pregnancy his mother underwent multiple radiotherapy and received medication as the doctors thought it was a tumour not a pregnancy. As a consequence Fidel Serapio was born with severe arthrogryposis multiplex congenita, which meant that he has had no use of his arms or legs since earliest childhood.

He was initially schooled at home and, from an early age on, wrote and drew with his mouth. It was only at age nine that he became able to attend a special school and completed primary and secondary school there. During that period Fidel Serapio took part in various drawing and painting competitions. On several occasions he took first place, received diplomas or won other prizes.

Later he took a preparatory year for university and then attended a private computer school, where he completed a programme to become a graphic designer.