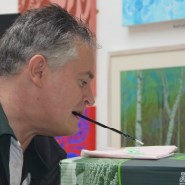 Bernard Baker was born on 6 June 1963. In 1983, while touring Switzerland on his motorbike, he had a serious accident when he dozed off on his bike at a speed of 120 km/h. His left arm was amputated and his right arm was paralysed. In 1988 he left Great Britain and went to live in Australia for a while. 1989 until March 1998 he lived on Bali, in a village named Ubud, the spiritual and cultural centre of the island. Mr Baker was introduced to mouth painting by the Canadian artist and art professor Morrie Rohrblick in 1996.