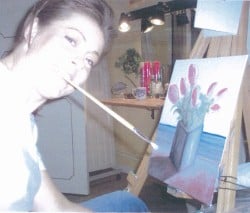 Eva Backlund was born in Sundsvall on 16 June 1973. On 3 August 1998, she was involved in a diving accident which left her with a spinal trauma and a fracture of the C4 - C5 vertebrae causing her upper and lower limbs to remain paralysed. In 1999, she began using her mouth to express herself as an artist. She taught herself how to paint by mouth. From 2005 onwards, she has been supported as a scholarship holder by AMFPA. As an Associate Member, she has been part of the Association since 2011.

The artist predominantly paints themes from her native country, still lifes and portraits. In doing so, she uses oil and acrylic techniques.