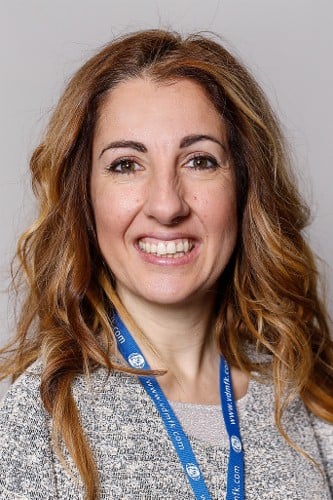 Simona Atzori was born without arms. She suffers from phocomelia. At the age of four, the artist started to paint with her feet. At first, she taught herself to paint and enjoyed it very much. The painter and writer Mario Barzon discovered Simona Atzori's talent and he subsequently supported her artistic development.

Already in 1983 Simona Atzori received a scholarship from the Association. In 1992 she took part in the international VDMFK exhibition at the Palazzo Ruspoli in Rome. At a private audience with Pope John Paul II the artist presented His Holiness with a portrait of His Holiness. This event was covered in the Catholic weekly magazine "Famiglia Cristiana". In 1996 she decided to dedicate herself fully to art. In the autumn of the same year she enrolled at the Faculty of Visual Arts at the "University of Western Ontario" in Canada, graduating with honours in 2001. In 2000 she became associate member of the Association. Since March 2002 she is a full member of the Association. In the meantime the artist can look back on many exhibitions in Italian cities such as Florence, Rome and Milan as well as abroad. Simona Atzori received numerous distinctions and awards for her works in recent years and the media regularly report about her activities. One of the artist's most important hobbies is ballet. At the age of six she started taking ballet classes. In addition to her success as a painter Simona Atzori has also been very successful in this domain.