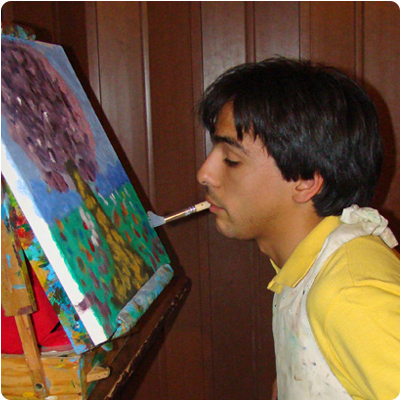 José Ramón Arredondo Gallardo was born on 8 August 1989 in Los Mochis, Sinaloa. He was born with cerebral trauma (neonatal hypoxia) that mainly affected his neuromotor development. From the age of three months on the problem became evident, as he had difficulties moving, turning over or holding the baby bottle. For the first ten years of his life various doctors and therapists looked after him. At the age of 11 he was admitted to the "Institute for the Achievement of Human Potential" in Philadelphia, Pennsylvania (USA). The therapy that he received there had to be discontinued for financial reasons. From the year 2006 on he was taken care of at the "Teleton Crit" in Guadalajara for two years. On account of his injury he is unable to walk and cannot express his thoughts clearly through speech. Due to the uncoordinated movement of his hands he cannot write or carry out other activities. José Ramón Arredondo Gallardo moves around in a wheelchair and in the house by crawling and on his knees. After completing secondary school he did a preparatory year for university in the open learning system of adult education. Currently he is studying tourism at university in the ninth term. In September 2009 José Ramón Arredondo Gallardo laid the foundation for mouth painting. Since February 2010 he has been taking painting lessons with VDMFK student member Lidia de Jesús Cháidez López (mouth painter) on a regular basis. José Ramón has specialised in oil painting and creates diverse landscape scenes of his native Mexico. Numerous contributions to exhibitions are among the activities of the mouth painter.