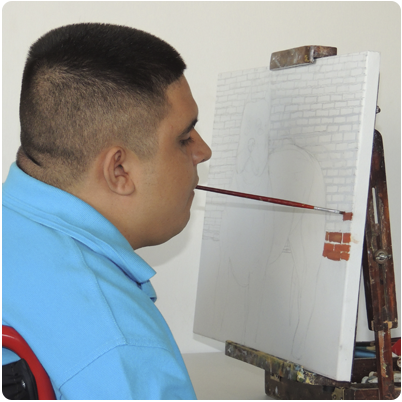 Carlos Fernando Araujo Corrales was born in Chois, Sinaloa, Mexico on 21 August 1988. After primary and secondary school, he began attending upper secondary school but was unable to complete his education there. At the age of 21, Carlos broke his neck at the C5-C6 vertebrae; this resulted in him becoming a quadriplegic. Four months after the accident he was able to get himself to sit in a wheelchair and, as a result of his rehabilitation therapy, improve the mobility and sensitivity of his upper body. Even so, he was unable to regain the mobility of his hands and legs. Some two years ago he met Brenda Làtigo, the president of an association for disabled people who invited him along to a painting workshop solely attended by disabled people. There he also met the teachers Martha Gonzáles and Lidia de Jesús Cháidez López (a mouth painter and VDMFK Student Member). He has regularly participated in mouth painting classes for various groups under the guidance of the above artists since January 2012. Since January 2013 he has taken regular private lessons under Martha Gonzáles. As a result, he has been able consistently to further his artistic progress. Carlos has already displayed his works at a number of exhibitions.