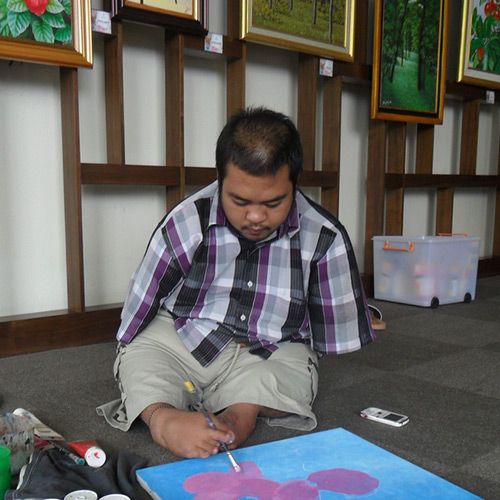 Muhammad Amanatullah was born with truncated arms and legs on 4 May 1993. This shocked his deeply religious parents. But their faith was strong, and so they believed that God had ordained them to raise him. As a result, they gave him the name Muhammad Amanatullah. Muhammad is the youngest of six children. He attended a primary school for children with disabilities up to the fifth grade and went on to attend public schools up to high school. His participation in various competitions in the fourth grade led him to begin painting. First he used coloured pencils, then water colours, acrylic paints and eventually, in the workshops of Mr Komang, oil paints. In addition to taking part in competitions, he also received invitations from various institutions to carry out painting demonstrations. Muhammad has also been interviewed on television. He says that his contentment with life is largely due to his ability to paint. He met Sabar Subadri at an art fair and found out about the VDMFK from him. Muhammad hopes that he can continue his life as an artist and show the world that he has something to give, despite his disability.