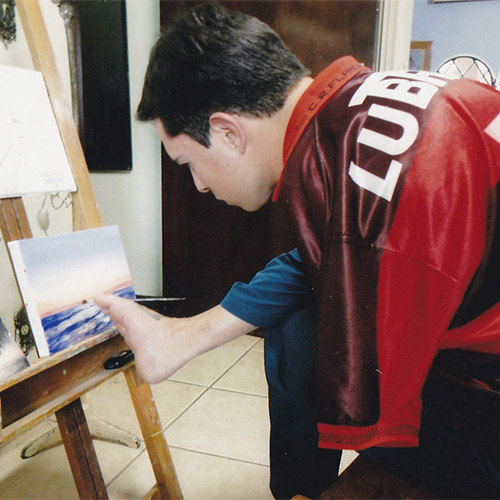 Lucas Figueiredo de Abreu was born in Varginha, a town in the Federal State of Minas Geraus on 25 April 1986. He was born without arms and gradually learned from early childhood to do virtually everything with his feet. Lucas attended a regular school, where he also began to scribble on paper. A short time later he was delighted to learn how to write and draw using a pen clasped between his toes. He later went on to study law and is currently busy with his preparations to pass the selection process for a position at a public institution.

Lucas was always very impressed by art and one of his childhood friends is also a designer. He regularly used to attend drawing classes with him. At the age of 14 he seriously began to take up painting with his foot and devote himself to art.

Lucas enjoys painting landscape pictures in oils. He currently takes art lessons once a week under Simone Giraldelli, a well-known teacher in the field of foot painting. In the meantime, the dedicated artist has staged several solo exhibitions and repeatedly participated in group exhibitions.