In the climate of the World Cup in Russia, the “Football Parade” exhibition showed 70 giant customized soccer balls on various well known places of the city of São Paulo.

Each of the soccer ball had a diameter of 1.30 m. Different artistic organizations of the city where invited to design them. With great enthusiasm, Brazilian mouth and foot painter created two designs for two different giant balls. They were exhibited from July 12th to 15th to the public at the Centro cultural FIESP in the heart of the city.

The “Football Parade” also consisted in an adoption of a Ball. The revenue of this donations program is aimed to support institutions and projects that use football as a tool for social inclusion. 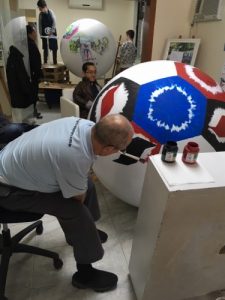