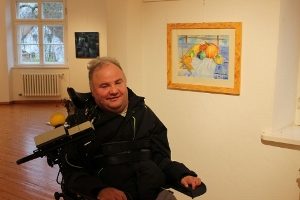 Markus Kolp was born in Augsburg on 18 February 1966. In November 1982, the artist was involved in a traffic accident which left him tetraplegic (C4) and as a result of which one leg had to be amputated. Approximately 4 years later, he decided to continue his school education and he successfully obtained his secondary school leaving diploma (Mittlere Reife). For therapeutical reasons, he was advised at school to use his mouth for painting. He took pleasure in it and kept mouth painting as a hobby even after school. Mouth painting became more and more important for him and he was an autodidact in terms of learning this artistic activity. He was quick to make significant progress. “When I focused on the coloured watercolour paints, it was for me like I was in a whole different world, a world in which I could leave all my physical and emotional problems behind”, he says. From 2004 onwards, he has been supported as a scholarship holder by AMFPA. Since 2011, he has been an Associate Member of AMFPA.

Markus Kolp’s favourite themes include flowers and landscapes which he paints using watercolour or acrylic techniques. His progress has repeatedly enabled him to present his works to a wide audience during solo and group exhibitions. 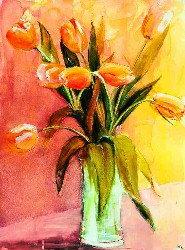