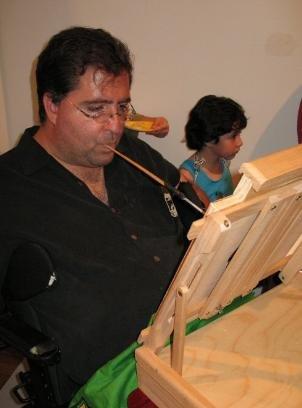 Mark Sotak was born on 17 January 1963 in Rocky River, Ohio. From 1977 to 1981 he attended high school in Rocky River. In 1981 he started to study marine biology at the university of Tampa. Shortly after the start of his first year at university Mark was invited by members of his fraternity to go for a drive. He lost control over the car and after it had overturned several times the vehicle stopped in a ditch. Mark suffered injuries to his spinal cord and has been unable to use his arms and legs since then. In the autumn of 1983 Mark enrolled at the Kent State University with English and political science as major subjects. A short time later he changed to the faculty of law at the Onio State University in Columbus, where he began a challenging double degree programme and graduated in 1990 with a doctorate in law and a master of arts in sport management. In August 2002 he laid the foundations for mouth painting encouraged by a good friend. Due to his boundless enthusiasm he created a wide range of works including landscapes, lake impressions, animals pictures and portraits. His stylised paintings with slight echoes of impressionism, which he has been able to present at numerous exhibitions, have attracted wide attention.