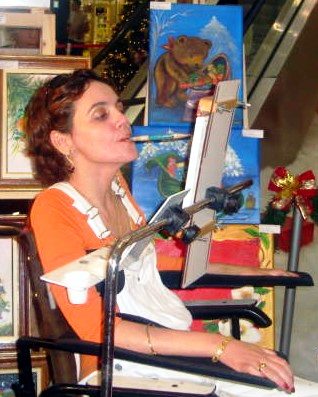 Born on 8 October 1971 in Vila Valéria (Brazil). As a result of a car accident in July 2000, where she suffered injuries to the C3, C4 and C5 cervical vertebrae, she is unable to use hands or legs. It was only a few months after the accident that she began to paint with the mouth as part of a therapeutic programme (July 2000). In order master her difficult fate the artist has worked very hard and has been able to make steady progress. In the meantime the mouthpainter has contributed to several group exhibitions and has had her own exhibitions, too. The press has also reported on the artist's activities.