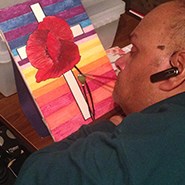 Mr Ranjit Bhamra was born on 9 November 1957 in Jinja, Uganda. At the age of two, he fell ill with poliomyelitis. For better medical help, he moved to England with his parents in 1965. There he was taken to a hospital, where several operations were carried out on him. During this time he started painting with his mouth, as he was already unable to use his arms and hands at that time. First, painting was a means of communication to him, as he could not speak English, but in due corse painting became a passion for him. In 1975, he won the first prize for a painting in an art competition. The same original as exhibited in the Royal Academy Summer Exhibition and was even sold. The works of this artist reveal much talent.