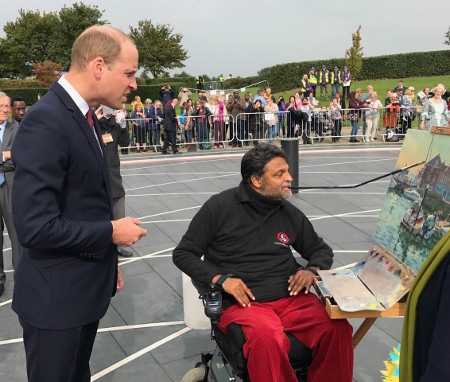 On Tuesday 26th September 2017 the Duke of Cambridge was the very special guest unveiling a commemorative pillar at the cenotaph known as the Milton Keynes Rose. The pillars at the Rose feature days of importance to local people and the event was to mark the 50th anniversary of the inauguration of the new town of Milton Keynes.

Mouth artist Keith Jansz was invited to highlight Disability Awareness Day which is celebrated every July 14th along with Valerie Williamson, one of the first British Paralympians.

Keith chose a painting of Padstow Harbour to demonstrate his painting technique to the Prince, a nod to his father’s title of Duke of Cornwall, explaining that he is unable to use his hands to paint following paralysis due to breaking his neck in a car accident in 1995. The Prince spoke to Keith about the potential to take on new challenges and embark on a new career after such a life changing injury.

Keith said: “ When he saw my painting the Prince said ‘ Wow, that’s amazing !’ He was intrigued by my ability to capture the Cornish light – a comment that thrilled me as it is what I strive to achieve in all my work.